A Dreamlike Sunset In Murter 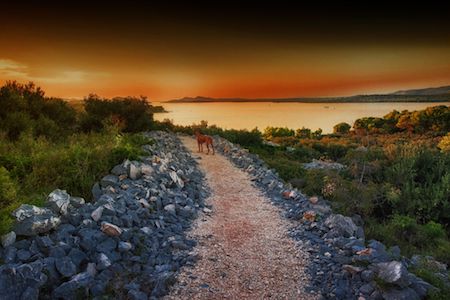 A Dreamlike Sunset In Murter

Croatia is full of incredible, beautiful islands, located at the entrance of the ‘Kornati Islands National Park’ is the island Murter, a dreamy spot, in North Dalmatia. Spoiled with crystal clear waters, lovely landscapes and breathtaking sunsets. Murter has a very indented coastline which means there are many bays with various beaches. The most famous beaches are located on the southern side of the island which is very special spot, as this is protected from the strong Bora (Croatian: Bura) wind.

Murter  has just a distance of 6 meter to the mainland and is connected with it by a bascule bridge coming from the small town Tisno. There are four towns located on the Island Murter – the older ones, Murter and Jezera, and the newer ones, Tisno and Betina. Tisno dates back to 1474 and one part of the town is on the island, and the other part is on the mainland. The vegetation in Tisno is very green and lush and a long promenade, invites visitors to take long summer strolls.

The island has been populated for nearly two millennia. An Illyric-Roman settlement known as Colentum has been found near Betina. In 1293, documents show that Murter was called “Villa Magna’ meaning big village. During the 13th century there were two documented settlements on the island—Jezera and Veliko selo, Srimač (now Murter) — and the island itself was mentioned in the year 1318 as Insula Mortari. Betina and Tisno were most likely built around the beginning of the 15th century, during the time of Ottoman attacks in the area. The population of the island increased as refugees fled from the Turks. Source wikipedia.

It’s well known that Croatia has the most beautiful sunsets.

“Zadar has the most beautiful sunset in the world, more beautiful than the one in Key West in Florida, applauded at every evening.” Those were the words of Alfred Hitchcock said during his visit to Zadar in May 1964.

But you will find many places at Croatia’s coast to watch this breath-taking spectacle.

A perfect opportunity for every landscape photographer to get incredible shots, combined with a beautiful holiday, great hospitality and the typical country food.

2 thoughts on “A Dreamlike Sunset In Murter”