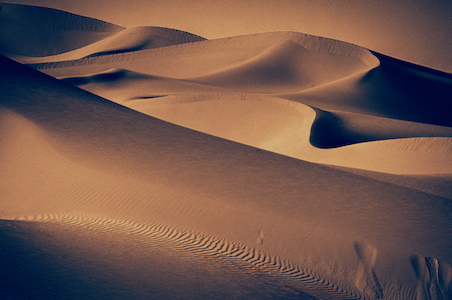 An unforgettable experience is a visit of the 650,000 square kilometers covering sand dunes of the Rub’ Al Khali Desert the largest uninterrupted desert on Earth. It’s a dream for every photographer to see the endless dunes, the sunrise and sunset with the wonderful changing light and shadow patterns. A natural wonder you shouldn’t miss as an adventurous world traveler. A place so peaceful and quite on one side and dangerous and inhospitable on the other side.

The uninterrupted sandy desert was a challenge thousands of years ago for kings, adventurers, traders and nomads. Crossing with camel caravans was a life-threatening task.

A sudden sandstorm could make crossing the desert a life-threatening adventure. The loss of water was the death sentence within a few hours.

The Empty Quarter receives just 1.2 inches of rain a year

The region is classified as “hyper-arid”, with an annual precipitation less than 35 millimeters generally. The area is one of the most sparsely populated and driest areas on earth. With temperatures of over 50 degrees a place in which only adapted survivors of the flora and fauna can cope.

“Unreal” or “Out of this world” is the fitting description of the Rub ‘Al Khali Desert.

After leaving the glittering cities behind and reaching this infinite expanse, you feel like an astronaut who has left Earth behind. An unreal world of breathtaking beauty.

The untouched landscape emerged from a science fiction film. As a result, the desert was already used as a film set for Matrix and Star Wars.

Authors such as G. Willow Wilson, H.P. Lovecraft, Frank Herbert to name just a few have also been inspired by the desert when creating their own fantasy worlds.