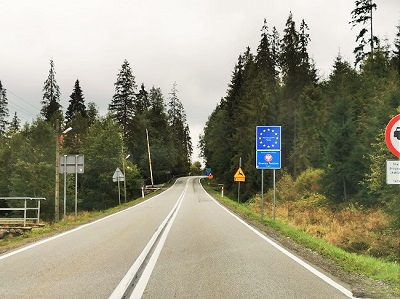 Back in Europe, after 13 years in the Middle East, an idea bumped into my mind. What countries in central Europe I have never visited? So it was just logic to think about the locations with interesting sights, taking pictures and to analyze my options. As my time window was narrow I had to develop a strategy what countries are possible to combine and allowed a roundtrip by car. In the end of September the border closures subject was predominant all over the news and I wanted to utilize my time maximum efficient, but spiced with some exciting activities. Following my own anthem ‘Stay inspired’ I did a thorough desktop research. Confident my desktop research mitigates the worst case surprises, I readied my camera and the car. When I started, it was not sure which borders might be closed already.

What made the tour even much more special is the fact, that in September 2020 Covid-19 had a strong grip on borders and travel limitation were all over the news. End of August I had to cancel a holiday apartment located at the scenic Balaton lake in Hungary, because Viktor Orbán decided, there will be no border crossing beginning on 1st of September 2020.

Starting in lower Bavaria the first stop on this city roundtrip is Brno, Czech.

Brno (/ˈbɜːrnoʊ/BUR-noh, Czech: [ˈbr̩no] (listen); German: Brünn, German pronunciation: [bʁʏn] (listen)) is a city in the South Moravian Region of the Czech Republic. Located at the confluence of the Svitava and Svratka rivers, Brno has about 380,000 inhabitants, making it the second-largest city in the Czech Republic after the capital, Prague, and one of the 100 largest cities of the EU. The Brno metropolitan area has more than 600,000 inhabitants.

Bratislava is the center of Slovakia and is located on the Danube river, which reaches a width of up to 300 meters when passing through Bratislava. In the city center, four imposing bridges lead over the Danube river.

Politics, culture and economy live here. Around half a million inhabitants liven up the city, there is even an airport and generally good connections. If you want to explore the city, you should take a day or two. The city center, a historical place with lots of architecture and medieval flair, is particularly worth seeing. Tourists can marvel at small and large sights everywhere here.

Nitra (Slovak pronunciation: [ˈɲitra] (listen); also known by other alternative names) is a city in western Slovakia, situated at the foot of Zobor Mountain in the valley of the river Nitra. With a population of about 78,353, it is the fifth largest city in Slovakia. Nitra is also one of the oldest cities in Slovakia; it was the political center of the Principality of Nitra. Today, it is a seat of a kraj (Nitra Region), and an okres (Nitra District).

Banská Bystrica (Slovak pronunciation: [ˈbanskaː ˈbistritsa] (listen), also known by other alternative names) is a city in central Slovakia located on the Hron River in a long and wide valley encircled by the mountain chains of the Low Tatras, the Veľká Fatra, and the Kremnica Mountains. With 76 000 inhabitants, Banská Bystrica is the sixth most populous municipality in Slovakia. The present town was founded by German settlers, however it was built upon a former Slavic settlement. It obtained the municipal privileges of a free royal town of the Kingdom of Hungary in 1255. The copper mining town acquired its present picturesque look in the Late Middle Ages when the prosperous burghers built its central churches, mansions, and fortifications. It is the capital of the kraj (Banská Bystrica Region) and the okres (Banská Bystrica District). It is also the home of Matej Bel University. As a historical city with an easy access to the surrounding mountains, Banská Bystrica is a popular winter and summer tourist destination.

Trnava (Slovak pronunciation: [ˈtr̩naʋa] (listen), German: Tyrnau; Hungarian: Nagyszombat, also known by other alternative names) is a city in western Slovakia, 47 km (29 mi) to the north-east of Bratislava, on the Trnávka river. It is the capital of a kraj (Trnava Region) and of an okres (Trnava District). It is the seat of a Roman Catholicarchbishopric (1541–1820 and then again since 1977). The city has a historic center. Because of the many churches within its city walls, Trnava has often been called “Little Rome” (Slovak: Malý Rím, Latin: parva Roma), or more recently, the “Slovak Rome”.

Košice (UK: /ˈkɒʃɪtsə/KOSH-it-sə, Slovak: [ˈkɔʃitsɛ] (listen); German: Kaschau, German pronunciation: [ˈkaʃaʊ̯] (listen); Hungarian: Kassa) is the largest city in eastern Slovakia. It is situated on the river Hornád at the eastern reaches of the Slovak Ore Mountains, near the border with Hungary. With a population of approximately 240,000, Košice is the second-largest city in Slovakia, after the capital Bratislava.

Kraków (/ˈkrækaʊ, -koʊ/, alsoUS: /ˈkreɪk-, ˈkrɑːkaʊ/, UK: /ˈkrækɒf/, Polish: [ˈkrakuf] (listen)), written in English as Krakow and traditionally known as Cracow, is the second-largest and one of the oldest cities in Poland. Situated on the Vistula River in Lesser Poland Province, the city dates back to the 7th century. Kraków was the official capital of Poland until 1596 and has traditionally been one of the leading centres of Polish academic, economic, cultural and artistic life. Cited as one of Europe’s most beautiful cities, its Old Town was declared the first UNESCOWorld Heritage Site in the world.

Wrocław (UK: /ˈvrɒtswɑːf/VROT-swahf, US: /ˈvrɔːtswɑːf, -slɑːf, -slɑːv/VRAWT-swahf, -⁠slahf, -⁠slahv, Polish: [ˈvrɔt͡swaf] (listen); German: Breslau[ˈbʁɛslaʊ] (listen); Czech: Vratislav; Latin: Vratislavia) is a city in southwestern Poland and the largest city in the historical region of Silesia. It lies on the banks of the River Oder in the Silesian Lowlands of Central Europe, roughly 350 kilometres (220 mi) from the Baltic Sea to the north and 40 kilometres (25 mi) from the Sudeten Mountains to the south. The official population of Wrocław in 2020 was 643,782, with a further 1.25 million residing in the metropolitan area.

Brief description of cities are mainly quoted from Wikipedia because the quality is just good.