The Island of Pag 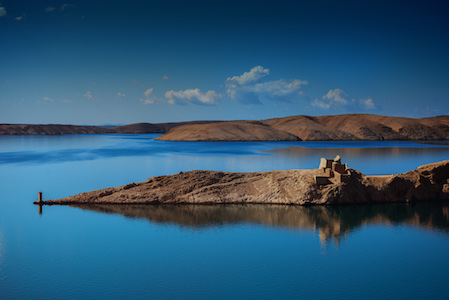 The Island of Pag

When crossing the Paški most (bridge), you will discover the ruins of a small fortress on the very tip of the Island of Pag. It’s called “Fortica” and it has been standing there since the Middle Ages protecting or guarding the narrow straight between Pag and the mainland.

The main building, as the entire complex is in fairly sad shape but still shows how wonderful and powerful this stronghold once was!

The entire area surrounding it is bare, “moon like”. Due strong bura wind that is quite common in this area, nothing can grow on the sides open to Velebit mountains – “home of bura wind”. It’s not because of the strong winds but because bura covers everything with sea mist and all that is left, after the water dries, is salt. Only the most stubborn grass and bushes survive.

The name of this wind and its spelling deserves some explanation. The wikipedia definition is best as follows anyway: “It is known in Greek as μπόρα (mpóra, pronounced bora) and Italian as bora. In English, the name bora is used. The Serbo-Croatian name bura and Sloveneburja are not etymologically related to bora; they derive from Common Slavic burja ‘storm’ (from the verb *burĭti), and the meaning ‘bora’ developed later.

When the furious Madame Bura arrives.

Madame Bura is the strongest wind on the eastern coast of the Adriatic. She starts to blow suddenly and immediately with great strength. Especially in winter she can get very furious with gusts up to a maximum of 250 km/h.

But she has another, milder summer face, which is far from the extreme winter one. In summer she is calming down latest after 3 days. Looks like she is enjoying the warm, sunny summer weather too.

Her constant day-night dynamic, let her blow most powerfully from dusk to morning. Then she eases slightly, and is the weakest from about midday for the next two to three hours. It is said, that “She has gone to lunch”.

On the other hand, she is a healthy wind because she brings refreshment and clears the air, and the droplets of the sea that she spreads far from the coasts are a clean disinfectant.

The sea spray which remains on the grass on which the sheep graze is one of the characteristics which give the special aroma to their meat and milk, and it is in fact due to Madame Bura that the island of Pag has become famous for its cheese and sheep.

To see beautiful Pag Island with your own Lens, book your tailor made photo tour Croatia with me.