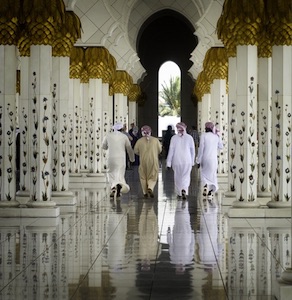 In 2005, I moved to Dubai, one of the seven Emirates of the UAE, and used to live there for 12 years. I was working there in different functions at the German International School. My change of career led me to some interesting tasks as a Tour Guide, Artist and Photographer. That’s why I generated countless pictures of this amazing location, fast paced and it seems endless transition. In 2017 I moved back to Europe. Stay tuned for the upcoming blogs.

Today, we start with Abu Dhabi, the capital city of the United Arab Emirates (UAE), the largest of the seven emirates. The Peninsula of Abu Dhabi is in the Arabian Gulf. It adjoins the Kingdom of Saudi Arabia and the Sultanate of Oman. Occupying almost 87% of the country’s total area, Abu Dhabi emirate covers around 67,340km², which comprises mostly desert, including part of the Empty Quarter (Rub Al Khali) and salt flats/sabkha. Abu Dhabi’s coastline extends over 400 Km.

Parts of Abu Dhabi were settled as far back as the 3rd millennium BC, and its early history fits the region’s nomadic, herding and fishing patterns. The Arabian Gazelle is known locally as ‘Dhabi’, and gave its name to the country’s capital, Abu Dhabi (Father of the Gazelle) by the early Bani Yas tribe hunters who discovered the island when tracking a gazelle and found a rare freshwater spring. Until the mid-20th century, camel herding, agriculture, fishing and pearl diving were the major occupations within the emirate. Everything changed in 1958 when oil was discovered, and the development of modern Abu Dhabi commenced.

Sunshine and blue skies can be expected almost every day in Abu Dhabi. The city experiences a really hot and humid climate in the months of April to September when the maximum temperatures average above 40 °C. During this period, unpredictable sandstorms also occur in the city and sometimes visibility gets down to a few meters. Normally, air-conditioning systems can be found in all buildings in the city. The period of October to March is comparatively cool. Dense fog can be also seen on some days. January and February are the coolest months of the year.

My pictures were all taken personally when visiting the Sheikh Zayed Mosque several times, and later on edited them artistically.

The project was launched by the late president of the United Arab Emirates (UAE), Sheikh Zayed bin Sultan Al Nahyan, who wanted to establish a structure that would unite the cultural diversity of the Islamic world with the historical and modern values of architecture and art. The local people in Abu Dhabi tell, that it was very sad, that Sheikh Zayed could not see the beautiful Mosque when it was finalized as he left us before the inauguration.

For various reasons (e.g. changing the owner and the terms of use) I have closed my 500px account with around 800 pictures and 34 galleries with different motif collections. Further blog posts follow on FOTOKUNST-LIMITIERT and Phototour4you to make these pictures available to my 76,000 followers.