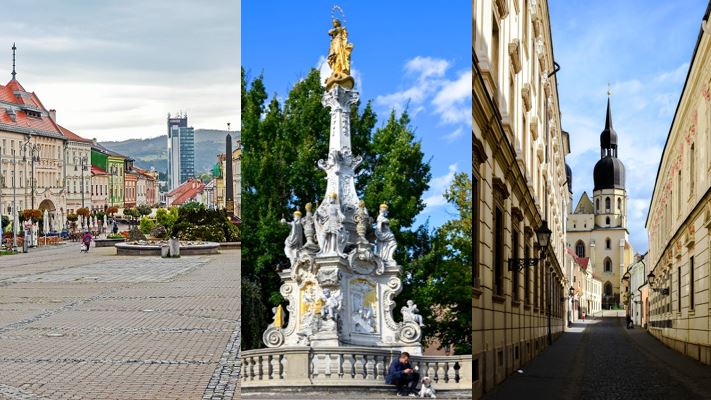 Leaving Bratislava on route to Banska Bystrica to stay there for one night, I had a brief visit in Trnava and Nitra. All are very neat and cozy. Just to remember, this link shows you the ‘city trip uncertain‘.

Not far from the popular capital Bratislava is the university town of Trnava, a fascinating and inviting travel destination.

Explore the historic city center, the history of which probably goes back to the late 9th century and makes Trnava one of the oldest cities in Slovakia. In the 16th century the city experienced its boom with increasing commercial and religious importance.

Follow the course of the city wall and enjoy the view over the city center or climb the city tower. Some areas of the wall date back to the 13th century. The tower itself is a Gothic masterpiece dating back to 1574. The best views of the tower are from the large town square, which is lined with cafes and restaurants with outdoor seating.

The buildings of the University of Trnava and the impressive university church are also worth a visit. The educational institution was founded in 1635, and the heart of the church is a famous wooden altar from 1640. In what is now the university district, modern university buildings alternate with traditional buildings.

Also worth seeing is the Cathedral of St. Nicholas with its two round towers and the yellow facade. Trnava Cathedral is a structure that was built in the 17th century around an older church from the 14th century.

The ancient Nitra is not only the oldest town in Slovakia, but also an important economic center of western Slovakia, the seat of two universities and a center of agricultural education and research.

The Nitra Castle (Nitriansky hrad) with its nested churches, the bishop’s seat and the surrounding fortifications with a single gate, is one of the most interesting building complexes in Slovakia. The castle complex, located high above a meander of the Nitra River, was probably built at the time of the fall of Great Moravia. The castle got its current appearance in the 17th century. One of the main attractions is the Cathedral of St. Emmeram, which serves as the bishopric and actually consists of three different buildings.

Banská Bystrica is has around 77,000 inhabitants and is the headquarter of the Regional Association of countryside preservation ‘Banskobystrický kraj’ and the Matej Bel University of Banská Bystrica. It is the largest city in the district of the same name and the fifth largest city in Slovakia after Bratislava, Košice, Prešov and Žilina. Historically, it is a famous medieval and modern mining town and has valuable art-historical monuments.

There is much to tell about Banska Bystrica

I mention ‘The City Castle’ in particular after spending the evening in the spectacular restaurant Bystrická Klubovňa. Check Klubovňa. Service and staff excellent, food amazing with delicious local cousin, also international feel well food no complaints. The local beer brands are of course superior to any international industrial mass productions.

The City Castle of Banska Bystrica

Bystrica was fortified in the 16th century when the Ottoman Empire extended to what is now southern Slovakia and threatened the mining towns. In the end, however, these systems were not needed.In this context, the town castle in Banská Bystrica was created, which is no longer recognizable as such due to the lack of fortifications, but can rather be described as an ensemble of houses on a castle hill. The most striking part of the city castle that is still preserved today is the barbican. The former castle gate is now the entrance to a restaurant.

Other parts of the former fortifications can still be found in the city, including a bastion near the Museum of the Slovak National Uprising.

Nope, was not a hunting party for a vegetarian

My accommodation here felt like I was invited for a hunting party, at least the interior and the house looked like being the perfect venue for such an endeavor.