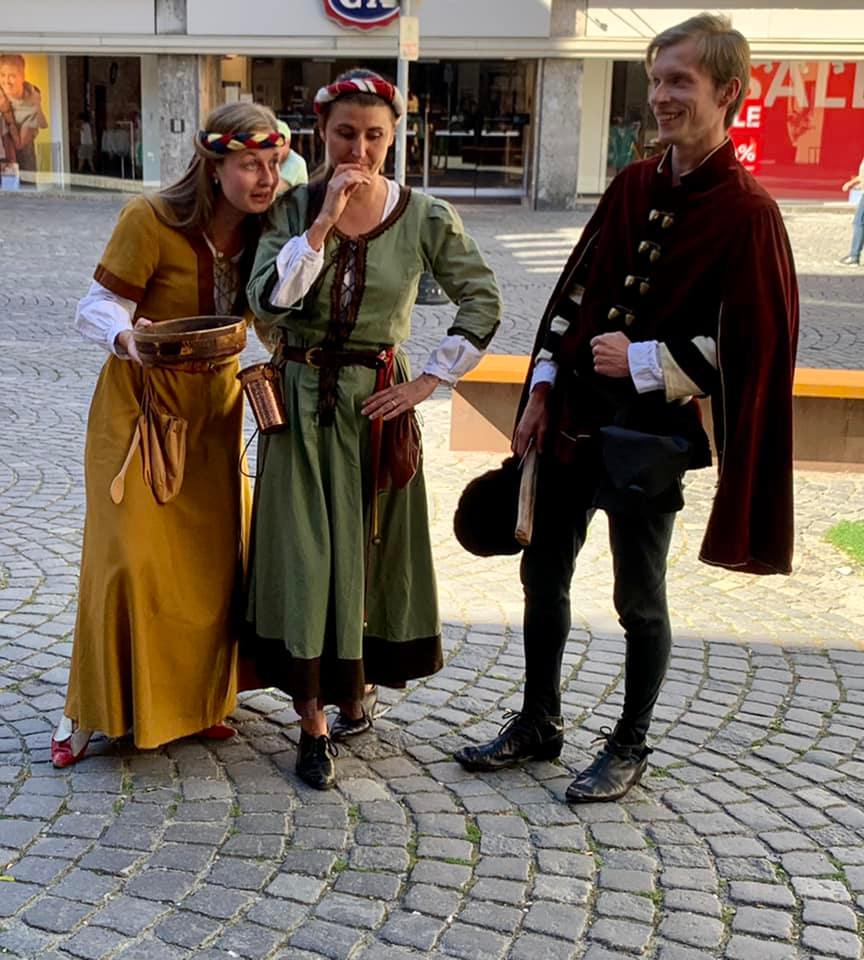 Today I have the pleasure of accompanying the exciting stories “Of Knights and Villains” in Landshut.
I was able to experience a guided tour with various performances with the Theater Nikola Landshut and Margaret Engels.
There is highly interesting historical information and exciting street theater that takes you into the secrets of the most glamorous festival of the late medieval times, the Landshut Wedding. “At first hand” is shown how, in 1450, Duke Ludwig the Rich asked for the hand of the beautiful Hedwig of Poland. A jousting tournament and performances by the traveling folk are in attendance, as well as the incredible mysteries of ‘Ash divination’ being explored.
And all this with medieval music by the grandiose musicians of “Cantafollia” website Cantafollia.

The Landshut Wedding is a historical festival lasting several weeks that is currently performed every four years in the summer in Landshut, the last time from 30 June to 24 July 2017. The Covid-19 pandemic event paused it. It continuous in 2023, 30th June till 23rd July. It commemorates ‘the wedding in Landshut in 1475, of Georg’s ‘The Rich’, son of the Bavarian Duke Louis the Rich, celebrated with Hedwig Jagiellonica, daughter of the Polish King Andreas Casimir IV. The festival was included in the nationwide register of intangible cultural heritage in 2018.

The wedding between Georg and Hedwig was of great political importance, because the connection between the two nobles was seen as a strong alliance against the power of the Ottomans. The marriage was preceded by intensive talks between the two princely houses in 1474, and the marriage was negotiated in Kraków by embassies.

The bridal journey of 18-year-old Hedwig began in the fall of the following year. It lasted two months and led on the then poorly developed trade routes via Berlin, Wittenberg, Leipzig, Altenburg, Zwickau, Oelsnitz/Vogtland and, changing the planned route, via Eger and Regensburg, taking a detour to Nuremberg before Hedwig her groomsman, Otto II von Neumarkt, arrived in Landshut. Here the marriage aspirant was warmly welcomed by the princes and bishops who had traveled there. The Elector of Brandenburg, Albrecht Achilles, compared the marriage to a divine providence for the benefit of Christianity and the empire.

The wedding took place on November 14th and 15th, 1475 in Landshut. The bridal couple was married by Salzburg Archbishop Bernhard von Rohr at the parish church of St. Martin, which dominates the city. The bridal procession then led through the old town to the town hall. There the Emperor Friedrich III escorted the bride to the wedding ceremony. It is reported that ten thousand guests attended the event, drinking, dancing and enjoying themselves at the jousting tournament.

2 thoughts on “Knights and Villains – Landshut”