Landshut – my tips for a photography and city tour 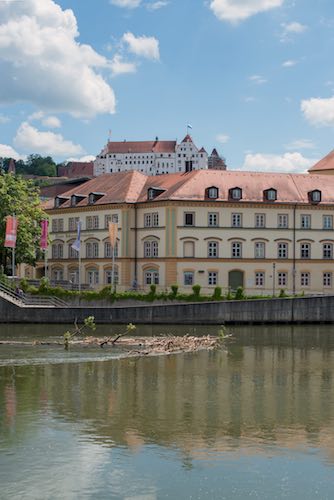 Landshut – my tips for a photography and city tour

What can you discover in Landshut?

That is the question my good friend and myself ask ourselves before we visit the city in lower Bavaria situated on the river Isar.

The Landshut “old town” is a broad street that may have been aimed at an Isar crossing in prehistoric times. Since the city was founded in 1204, it has been flanked in a slight curve by rows of houses and closed at both ends by gates. A major fire forced the city to be rebuilt in 1342. The Gothic old town of Landshut with gabled houses from the 15th and 16th centuries is one of the most beautiful Streets of Germany. Every architect photographer will be amazed.

Landshut offers a colorful cityscape from the middle age with St. Martin’s Church and Trausnitz Castle, which sits enthroned on a hill above the city. It is a cityscape that is worth exploring.

We spontaneously set off on a sunny day in June with my Nikon D600 in my bag to take a closer look at the city. Landshut already advertises itself as the “Gothic city” along the motorway, and it owes this advertising slogan not only to the brick Gothic style church with the tallest brick tower in Germany (130 meters), which always draws our gaze upwards. The houses along the pedestrian zone in the city center have survived for centuries and are so well cared for by their residents that the city looks like freshly cleaned.

Tips for the old town of Landshut

It is best to start a city tour through Landshut walking through the green areas along the Isar. Under the deciduous trees there is a promenade along the shore, from which there are always views of the tower of St. Martin’s Church and Trausnitz Castle. We always stop because we have views and photo opportunities. Right behind the city theater, we turn right walking through the Ländtor. It is one of the city gates of Landshut from the 14th century city fortifications that still exist today. A few steps further the pedestrian zone begins, which keeps part of the old town car-free.

As we turn the corner, the tower of St. Martin’s Church looms in front of us. It is so high that we almost always have it in view on our walk. When we finally stand in front of it, it impresses us even more with its height. In 385, construction work began on this church from the Gothic period. Don’t miss to have a look inside the Church, it’s a breathtaking experience.

A visit to Trausnitz Castle is worth it because of the view that you have from the castle hill over the city of Landshut. The castle rises directly above the old town. You should have good shoes and a good fitness to walk the many stairs from the old town to the Castle. In the beautiful courtyard garden there is a lookout point on Landshut. This was once the castle park of the castle, but was opened to the public in 1837.

The castle is also accessible and can be visited. Further information on opening times and guided tours can be found on the website of Burg Trausnitz.

Back on the main street through the old town, we can see a house with a particularly striking façade. The “Landschaftshaus” from the renaissance time. The large Wittelsbachers are depicted on its front. From King Ludwig the Bavarian to Elector Maximilian I, everyone is represented. Almost every second person passing by pulls out their cell phone for a quick snapshot.

Landshut definitely a city worth a visit

Landshut is a city in which history can still be felt: in the impressive Gothic brick church, but also in the old houses, the city gates and the remains of the city wall, which we discovered on this tour.