Bratislava – Off to Slovakia! 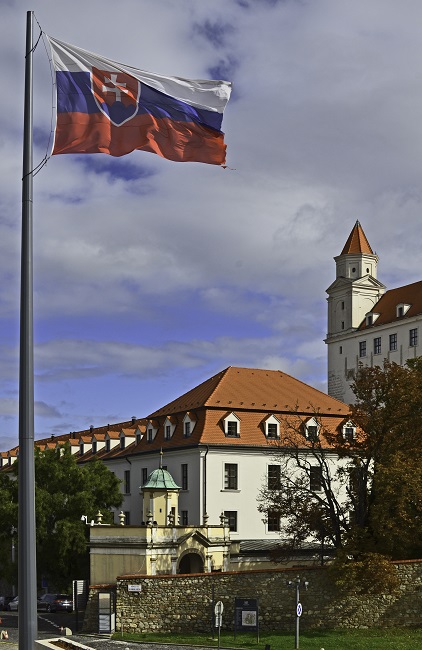 Bratislava – Off to Slovakia!

No, Slovakia is not located by the sea and the capital of Slovakia is not Ljubljana. No, Czechoslovakia has not existed for many years, and no, Slovakia has never been a part of Yugoslavia. Slovakia, is a landlocked country in Central Europe and is often confused with Slovenia or simply forgotten. What a pity, because Slovakia definitely has so much to offer one would never think off.

If you want to experience something extraordinary and original, then Slovakia is the right destination for you. The country has so many hidden magical places just waiting to be discovered by you.

This is part of a the blog ‘City Roundtrip Uncertain‘ . The roundtrip stages are linked here.

Bratislava is the center of Slovakia and is located on the Danube river, which reaches a width of up to 300 meters when passing through Bratislava. In the city center, four imposing bridges lead over the Danube river.

Politics, culture and economy live here. Around half a million inhabitants liven up the city, there is even an airport and generally good connections. If you want to explore the city, you should take a day or two. The city center, a historical place with lots of architecture and medieval flair, is particularly worth seeing. Tourists can marvel at small and large sights everywhere here.

Bratislava Castle (Slovak: Bratislavský hrad, IPA: [ˈbɾatislaʊ̯skiː ˈɦɾat] (listen); German: Pressburger Burg; Hungarian: Pozsonyi vár) is the main castle of Bratislava, the capital of Slovakia. The massive rectangular building with four corner towers stands on an isolated rocky hill of the Little Carpathians directly above the Danube river in the middle of Bratislava. Because of its size and location, it has been a dominant feature of the city for centuries.

The location provides excellent views of Bratislava, Austria and, in clear weather, parts of Hungary. Many legends are connected with the history of the castle. (Quoted from wikipedia)

Food and Brewery – A Highlight what deserves attention

Yes, this place the Bryndzové halusky (in German Brimsennocken) were eaten at Patronsky Pivovar / Patrons’ Brewery Bub. Sitting there and studying the Patrons’ Newsletter available in Slovak and English, shows the attention, service and focus to their customers. In these September days when visiting the place proved, Patronsky maintains the highest quality. This is a place one will say ‘you meet twice in life’. Download the newsletter available as a pdf.

To take the feeling of Slovakia with you, you should definitely try the typical Slovak Bryndzové halusky (in German Brimsennocken). Bryndzové halusky is the national dish of Slovakia. The cams are made from potatoes and flour, which are mixed in a pan with melted bryndza. Bryndza is a traditional Slovak cheese that resembles the sheep’s cheese one might know from Slovakia. The rule is – the more potatoes and bryndza, the better.

The dish is served with bacon and stew (when you are a veggie, just remove it, or order it without it), it may remind you of cheese Spätzle, but it tastes quite different. For the complete Slovak menu, you should add a whey drink.

Bryndzové halusky, as well as many other typical Slovak dishes are not an easy diet. The Germans say “leichte Kost” but their is no real good translation to English. Meaning: It is a challenge when you empty the plate, because it is delicious but the hearty diet sometime, depending on your day, can happen be hard on your stomach. That is not a rule or assured, but you have to feel for it and sure after a 3 hours walk, I believe your system is ready for such a “heavy weight, Sumo meal”. That is why the Slovaks like to drink a digestive cup usually before, during and after the meal. Of course, all for the health aspects when dining out. The service will certainly offer you Slivovica, a Slovak fruit brandy from plums, or Borovicka, a Slovak spirit made of juniper berries, which you should better accept for your stomach’s sake!

You can start your tour with a walk through the city center and the historic center while enjoying the architecture with its medieval flair. You will surely pass the Cumil (Gaffer), which is a bronze statue that looks out of a gully. During “standard tourism times”, Chinese tourists completely surround it with little chance of having a clear view of it. While my tour was during the Covid-19 pandemic days the streets were almost empty so I had the ‘Cumil for me alone. Also, unlike others, I did not stumble on it if one walks home at night from the many bars in the city center. Since even one or the other bicycle and motorcycle has hit the statue, there is a big warning sign next to the Cumil, which says “Man at Work”. Well, whether he’s really working or not, we could discuss that, but he’s certainly happy when women walk by with short skirts.

During your explorations, you shouldn’t miss the main square or the ‘Michaels Gate‘ (Michalská brána). You can finalize your walk on the Danube riverbank and sip a Slovak Radler, which has the same name in Slovak language as the German original. The term Radler became international anyway as the mixture of beer and lemon soda is famous for decades. The Slovak version tastes much more tangy than the German original.

Another striking building in Bratislava is the UFO Restaurant, which towers over the SNP bridge. As it is one of the tallest structures in the city, it is hard to miss.